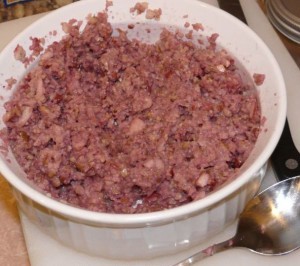 Passover isn’t here until April 15th but many of the products are already appearing in grocery stores. Not all Passover foods are gluten-free, but many are, and there’s a much wider selection than usual at the grocery store. This can be a good time to stock up on GF cakes and mixes, cookies, macaroons, some of the “bread” crumbs and supplies like potato starch. As an added bonus for people with multiple restrictions, most Kosher for Passover products contain no corn or soy products, either.

In a nutshell, the basic rule of foods for Passover is no leavened foods, which eliminates normal breads, cakes etc. Matzo is the main exception. Matzo is an unleavened bread usually made from wheat and is eaten regularly, and some products contain products with Matzo and matzo meal, which also potentially listed as cake meal or farfel. However, many products don’t contain gluten. Or, if you find products labeled “non-gebrok or gebroktz or grebrochts” (or another spelling variation) they’re non-grain containing and therefore have no gluten-containing ingredients. Often Kosher for Passover products and cakes are made of potato flour or nut meals rather than wheat or glutinous grains.

Keep in mind that many Passover foods are imported from other countries. Technically, imports must follow the FDA allergen labeling laws, but I can say I’ve seen many that aren’t labeled quite in the same way as the FALCPA U.S. labeling laws dictate So the label on an import may say matzo, but may not say “wheat” explicitly or have the disclaimer stating that it contains wheat.

Most Kosher for Passover products will have to adhere to strict standards for cross contamination from a religious perspective. Voluntary allergen labeling statements (AKA “Made in a factory” claims) are still not regulated.

From a gluten-free perspective, possibly the best part of Passover is AFTER Passover, when all of the great gluten-free goodies are on sale! Passover ends April 22th 2022, so mark your calendars, because the word has gotten out in gluten-free circles and the mad rush is on.

Back when you really couldn’t get GF prepared foods in the regular grocery store, this was a much bigger deal. But it’s still nicer to have an expanded selection, and nicest of all is AFTER Passover, when all of the products are on sale!

For people who DO celebrate the actual holiday of Passover, not just the gluten-free food, here are some great recipes and information:

Other favorite gluten-free recipe sites for Passover? Let me know in the comments section on my website.

Lately, Whole Foods has stocked a gluten-free Matzah, and the brand is Yehuda, so keep your eyes peeled! You can also get it on Amazon. It’s not technically matza because it’s not made of oats, but it’s “Matzo style squares”. There are also many more Kosher markets, such as Kosher Mart in Rockville. Some local grocery stores also have a great selection.