BPA and how it might be affecting your health

In the colder weather, it’s harder to get fresh foods and more people look toward canned soups, canned veggies or fruit.

BPA (short for Bisphenol A) is everywhere, and if you’re not going out of your way to avoid it, it’s most likely in your diet.  It’s found in can liners, which includes canned vegetable, soup, or soda and even canned infant formula. It is in many plastic or polyurethane containers, water bottles and even on cash register tape. The hypothesis is that the chemical mimics estrogens, and can affect hormonal systems in the body.

There’s growing evidence that BPA is problematic.  A study came out from JAMA in Sept 2012 showing that BPA seems to be linked to obesity in children. 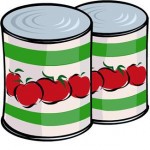 Moms with more BPA in their urine during pregnancy seem to have children with more emotional issues at the age of 3.  Many more studies are listed here. Certainly there is considerable speculation that it may be linked to cancer, too. Also, for reasons that are not clear, women with PCOS (a common endocrine disorder) seem to be more sensitive to BPA and have higher levels, and there is some speculation that BPA may even cause PCOS.

Consumer Reports has confirmed that cans do pack a whopping dose—often double the max recommended value.  AND, although we often have a sense this doesn’t affect us because we may choose to, say, eat fresh veggies. Unfortunately, if you do eat out, chances are parts of the meal came from a can.

FDA’s stance has always been that BPA is safe—however, now it’s been moved to “some reason for concern” category. They finally banned it from sippy cups…after manufacturers already stopped using it. More studies are underway, but in the meantime, consider reducing your risk!

Some manufacturers have declared their intent to ban BPA, like Campbell’s and Muir Glen. However, they haven’t yet actually stopped using it in all products yet.

Eden foods, who has been BPA free for MANY years. The only exception is their canned tomato products. They do test for gluten, too…

Edwards and Sons has products without BPA, and many gluten-free products, too.

Amy’s Organic cans are all BPA free since March 2012

Trader Joe’s has SOME BPA free cans as well.

Cheryl Harris, MPH, RD is a Registered Dietitian, Nutritionist and Certified Wellness Coach in Fairfax & Alexandria, VA. Cheryl works with people to feel and look their best with a range of specialties, including Celiac Disease, food allergies, pregnancy, breastfeeding, vegetarian and vegan diets, preventing diseases and “whole foods” eating. Let’s get you on your way to achieving your goals.  Email her or call 571-271-8742.